I have to fill y’all in on a little secret. My family will be growing a little bigger in July! We are excited to welcome a little babe into our home.

We made the announcement to our friends and family through a (gluten free) gender reveal party. If you haven’t heard of them, it’s a clever and fun way to announce the gender of your baby. Sometimes the couple doesn’t even know the gender until the party. While that can be fun, we just couldn’t wait!

We decided to do a boy scout/ girl scout theme because we wanted to do it outside and needed an excuse to make s’mores. I’m going to fill you in on how I executed all this and how I made it gluten free :).

I sent the following invite via text to all my peeps. Kaden’s shirt says, “new patrol leader July,” meaning he is getting bumped up to patrol leader and we are getting another member in our troop :).

For Kaden’s shirt: I got a white shirt and grabbed these iron on letters at Michaels. What I didn’t realize, until I sat down to start, is that you have to cut each letter out. So I got out my cutting board and an x-acto knife and it was surprising how easy and fast it was. I just followed the instructions on how to transfer them with my iron and bam, it looked fab!

To create the invite, I had my amazing sister Ivy use Adobe Photoshop- if you don’t have access to that, go to canva.com. It’s super easy to use and you can do a lot with it.

For the outfit I got out my husbands old scouting box. I used a bandanna and one of his old scout shirts for the “flag.” I snapped a couple pics with my iphone and had Ivy edit them for me. Use this app if you don’t have Photoshop.

This was our cute table set up. 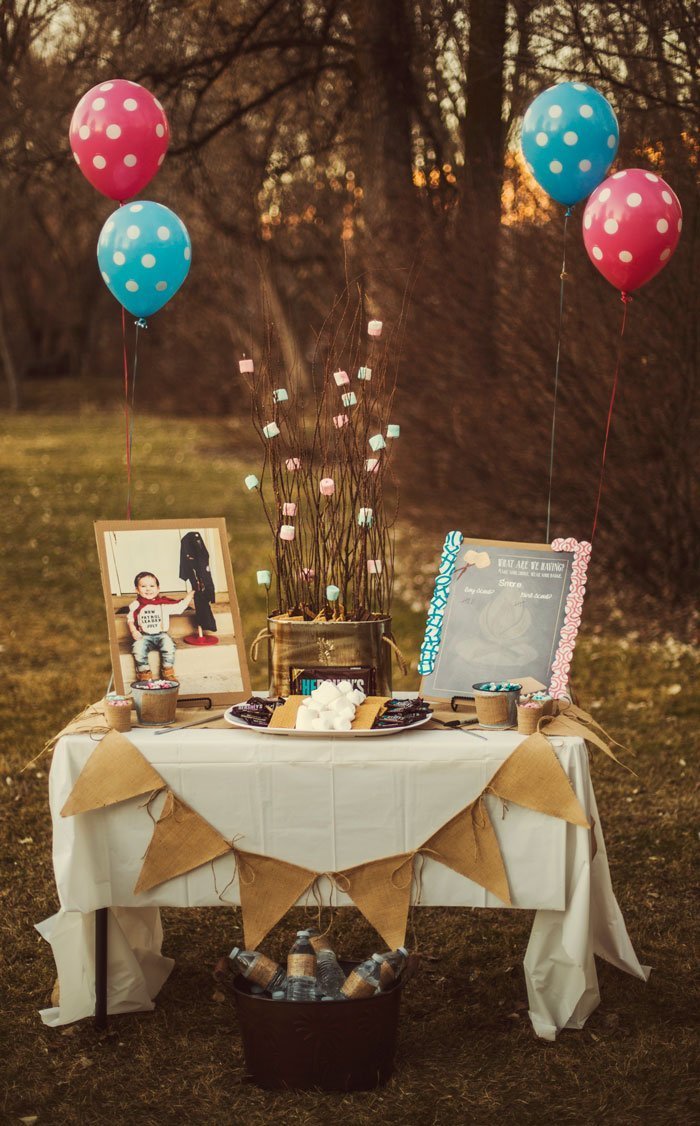 We got a super cheap plastic table cloth and burlap flag banner at a local party store, Zurchers. Party stores are the best for things like this because they usually have most of the specialty items you need, all in one place. 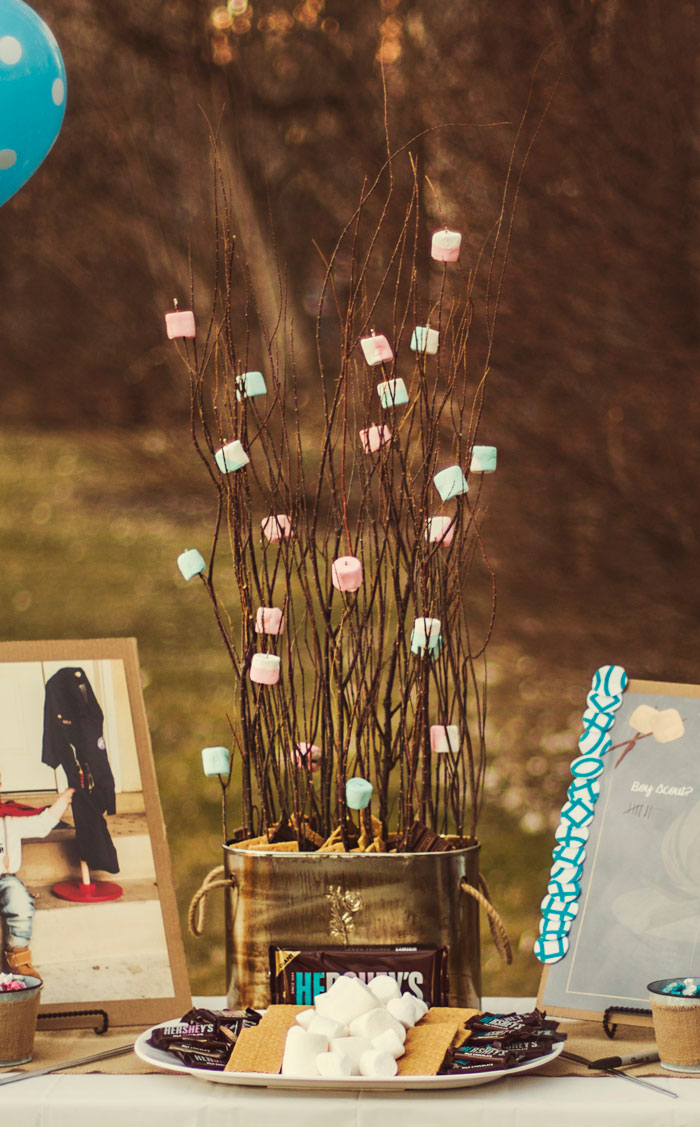 My mom found this amazing idea on a few Pinterest boards for a marshmallow center piece. We got a tin basin at Michaels and cut down a green floral foam block to fit inside the basin. We purchased the twigs at Michaels as well and strategically stuck them in the foam. We filled in the basin with crinkle cut confetti up to about the top of the basin and placed Hershey’s bars and graham crackers all around the top.

I dyed the marshmallows myself! I looked up a few ways on how to do it and kind of found my own way by combining a few of the methods. I got two little cups and put water in them, along with several drops of red/blue food coloring. I then took a toothpick and put it either inside the bottom or on one of the sides of the marshmallow (depending on what angle I wanted). I dipped some of the marshmallows diagonally, some in half horizontally/vertically, and for others, I simply dipped the whole thing. I would occasionally check to see how light or dark it was. Once it reached my desired color, I took it out and placed it on wax paper and left them out over night (If you want a tutorial on this, let me know!).

The next morning, I strategically placed the marshmallows on the twigs. 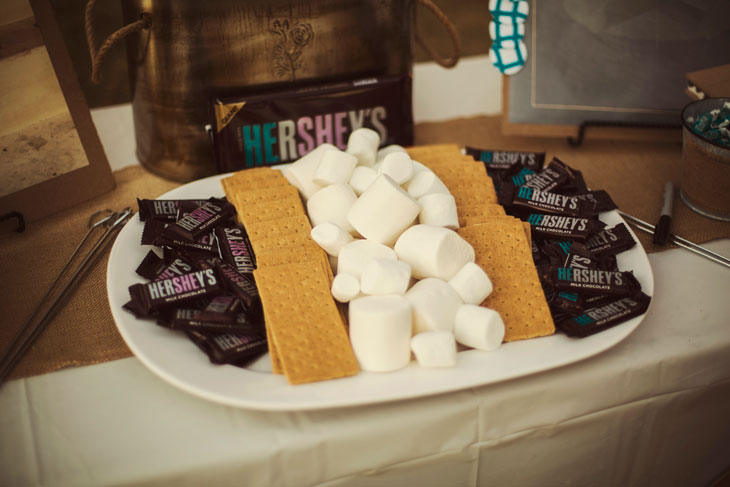 For the Hershey’s Chocolate Bars, I got a baby pink and blue sharpie and colored in the SHE and HE, setting them on either side of the plate. The big Hershey’s bar in the back has both HE and SHE colored in. This adds a nice little accent to the table and brings the two together.

The graham crackers in this picture are NOT gluten free. Bri and I grabbed our marshmallows straight from the bag (not from the table) and we used the amazing Schar graham crackers. If you haven’t tried them, or didn’t know about them, YOUR WELCOME! They are the super best. A little on the small side but they complete your s’mores experience with a bang. 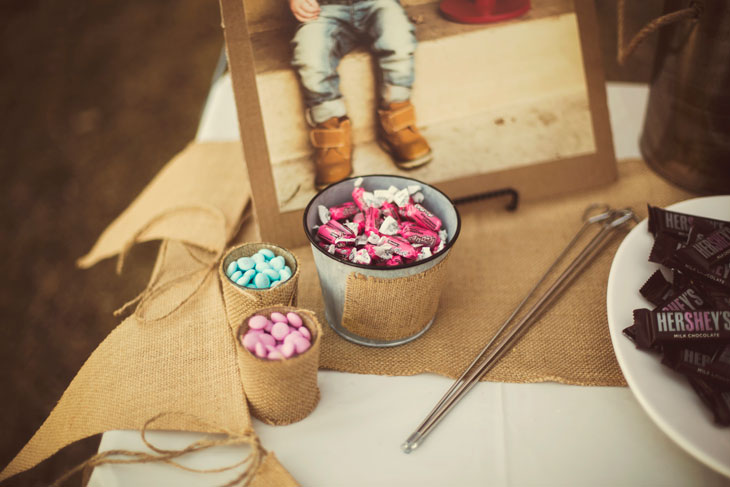 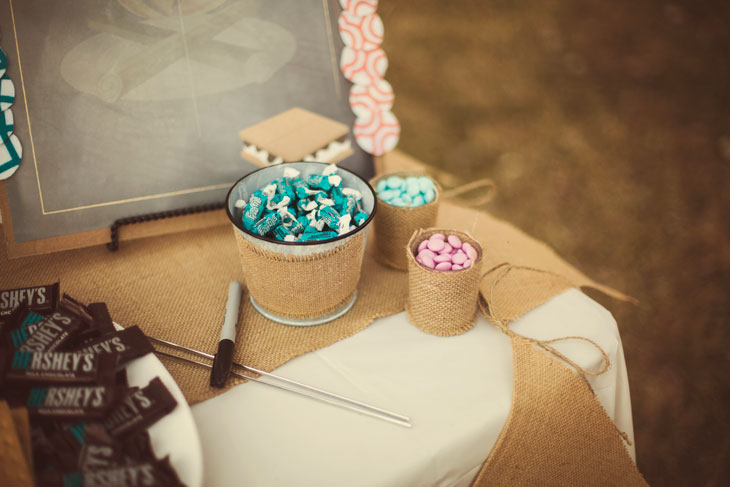 We purchased the table runner from Walmart. We got the cute cups, with the burlap already on them, at Zurchers.

I printed the picture of Kaden at Costco and used a cardboard box panel as the boarder.

We got the skewers at Target. Yes, they are definitely shish kabob sticks, but they were way cheaper than marshmallow skewers.

The candy in the cups are blue and pink M&M’s and Fruties. 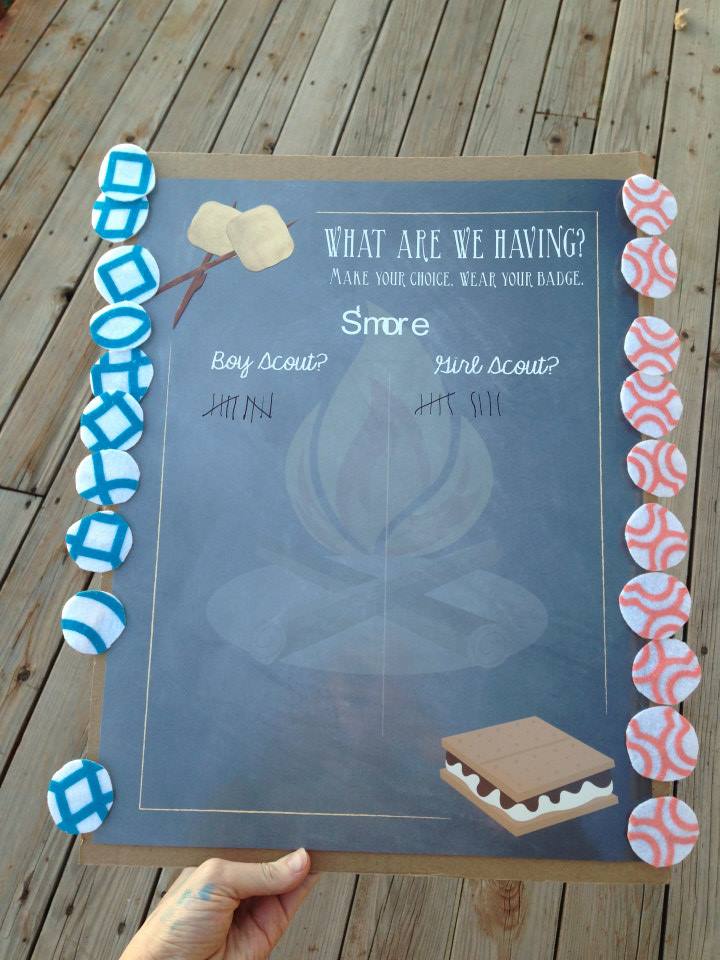 I did not get a very good picture of this, but we had everyone cast their vote for what the baby’s gender would be! They could either choose a girl scout badge or a boy scout badge, which they would wear around at the party. I got the felt from Walmart and cut little circles out of the sheet, hot gluing tiny clothes pins to the back. The poster was printed at Office Max and made with Adobe Illustrator, but again you could use canva.com.

We got a cute picture of everyone wearing their badge and supporting team girl scout or team boy scout. 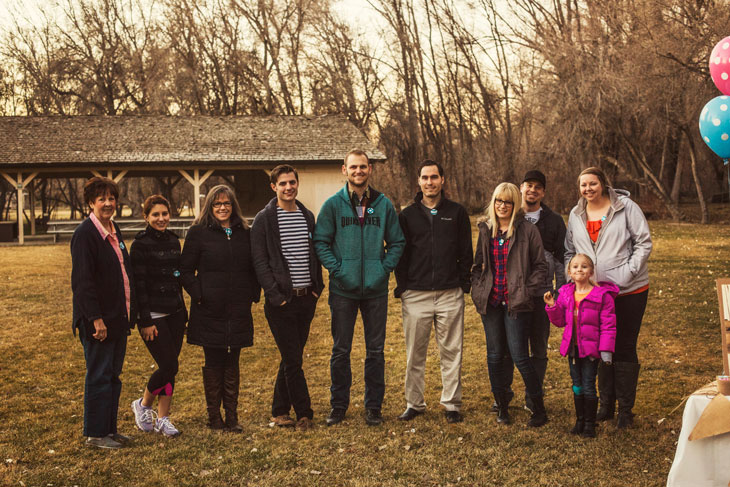 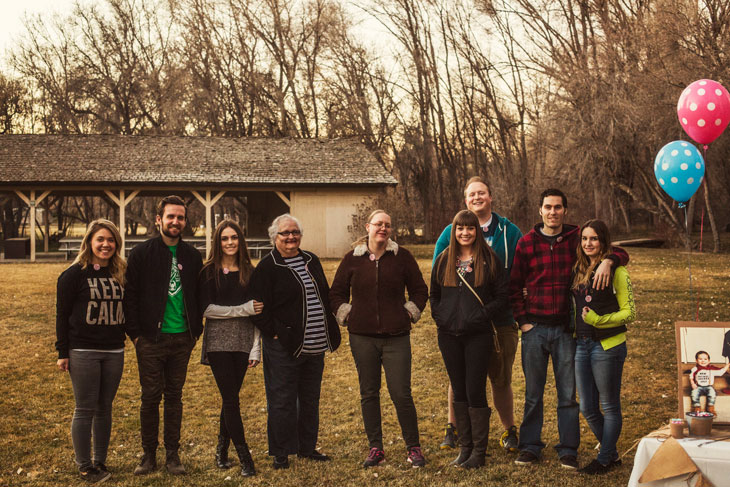 We decided to reveal the gender by having our son open up a cardboard box and have balloons of either blue or pink fly out.

We stacked two cardboard boxes on top of each other and just made sure not to shift them too much. We got a few helium balloons and taped the strings to the bottom of the box, inside. We placed the balloons just right so they would fly up as soon as it was open and taped the top shut. Kaden didn’t quite understand what was going on so we had to help him open it. He loved watching the balloons shoot up! 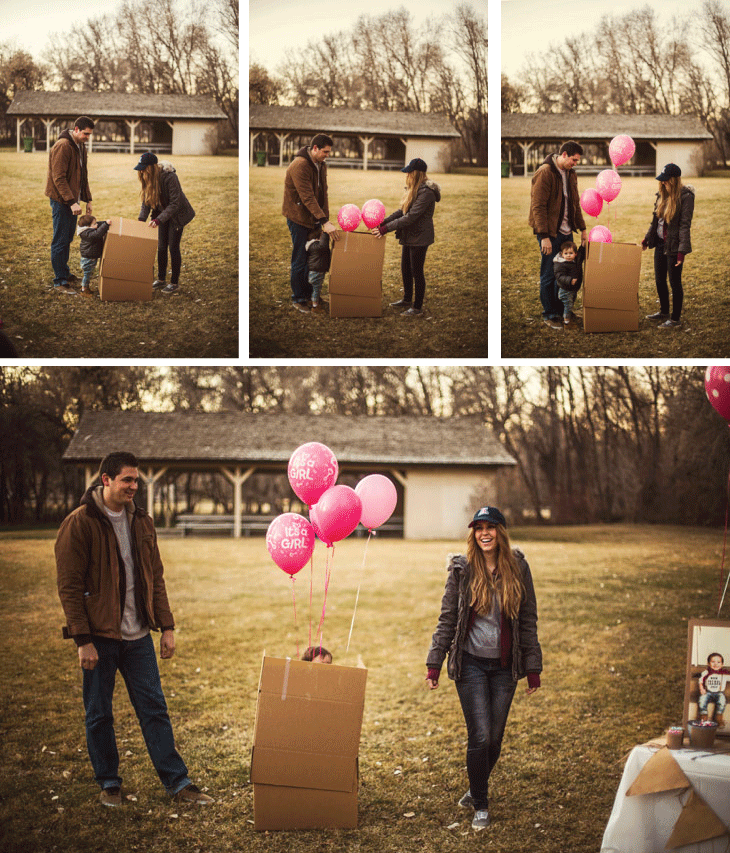 And it’s a girl! We are so excited and Kaden is excited to be “big brudder” :).